SEX AFTER 50: THE BEST YOU’LL EVER HAVE? My husband and I met in the sweltering summer of 1992 and started rocking and rolling immediately. But from the moment we got married a year later, we were 1) thinking about getting pregnant, 2) in a state of pregnancy, 3) recovering from pregnancy or 4) enjoying (and coping with) the results of pregnancy: babies, toddlers and, now, two teenagers. It wasn’t exactly conducive to swinging from chandeliers.

During those early years, sex was focused more on a result (children), but that’s no longer the case. Like most couples over 50, we are free to have sex pretty much whenever we want. But, do we?

Confused and in need of more information, I met with Dr. Margaret Nachtigall, a reproductive endocrinologist in New York City, who shared some statistics from a study done by The National Survey of Sexual Health and Behavior:

A study of married couples found age and marital satisfaction to be the two variables most associated with amount of sex. As couples age, they engage in sex less frequently, with half of couples age 65-75 still engaging in sex, but less than one fourth of couples over 75 still sexually active. Across all ages, couples who reported higher levels of marital satisfaction also reported higher frequencies of sex.

This study left me feeling that the older we got, the less we got it. Not good.

I raised this topic with some girlfriends one night over a bottle of wine, hoping to get insights into their concerns, and (yes, I admit it) how often they had sex (with their partners).

We all had the same question: I love my husband and he loves me, so why aren’t we having as much hot sex as we used to? We want to have sex, but sometimes we just aren’t into it. How do we get in the mood? We all hated thinking that things were slowing down, and that they might slow down even more. For sure, menopause can sometimes make sex uncomfortable, and our libido can drop off. But just because a woman is post-menopausal, does she automatically lose interest? Forever? Was that my future? Was I supposed to lock this door and throw away the key?

I was getting worried. And whenever I get worried, I do research. Finally, someone suggested I meet with Esther Perel, author of Mating in Captivity, which explores many of the questions my friends and I were confronting – specifically, why couples who have been together for a very long time often can’t sustain a rich, enjoyable sexual life … together. Esther was particularly eager to find out because in her view, sex after 50 may be the best sex we’ll ever have.

First, she said, we had to address some long-held views about sex after 50 that may not be true.

Then, we explored the three main tools that women can use to get into the mood:

So here’s the big reveal: After 50, we’re at a sexual crossroads, and need to make a choice: We could go through menopause, shut down that part of ourselves, lock the door and throw away the key. Or we could embrace this new life with a sense of freedom and fun – no more periods, no more worries about getting pregnant, no more doing it because there has to be a result. You may very well find yourself having the best sex … ever!

And finally, one little bit of advice: Stop looking for studies about how often other people have sex. No one really knows what goes on behind closed doors (no matter what they say to the survey interviewer). And … who cares? 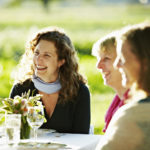 Schmoozing With Your Girlfriends is Great for Your Health!