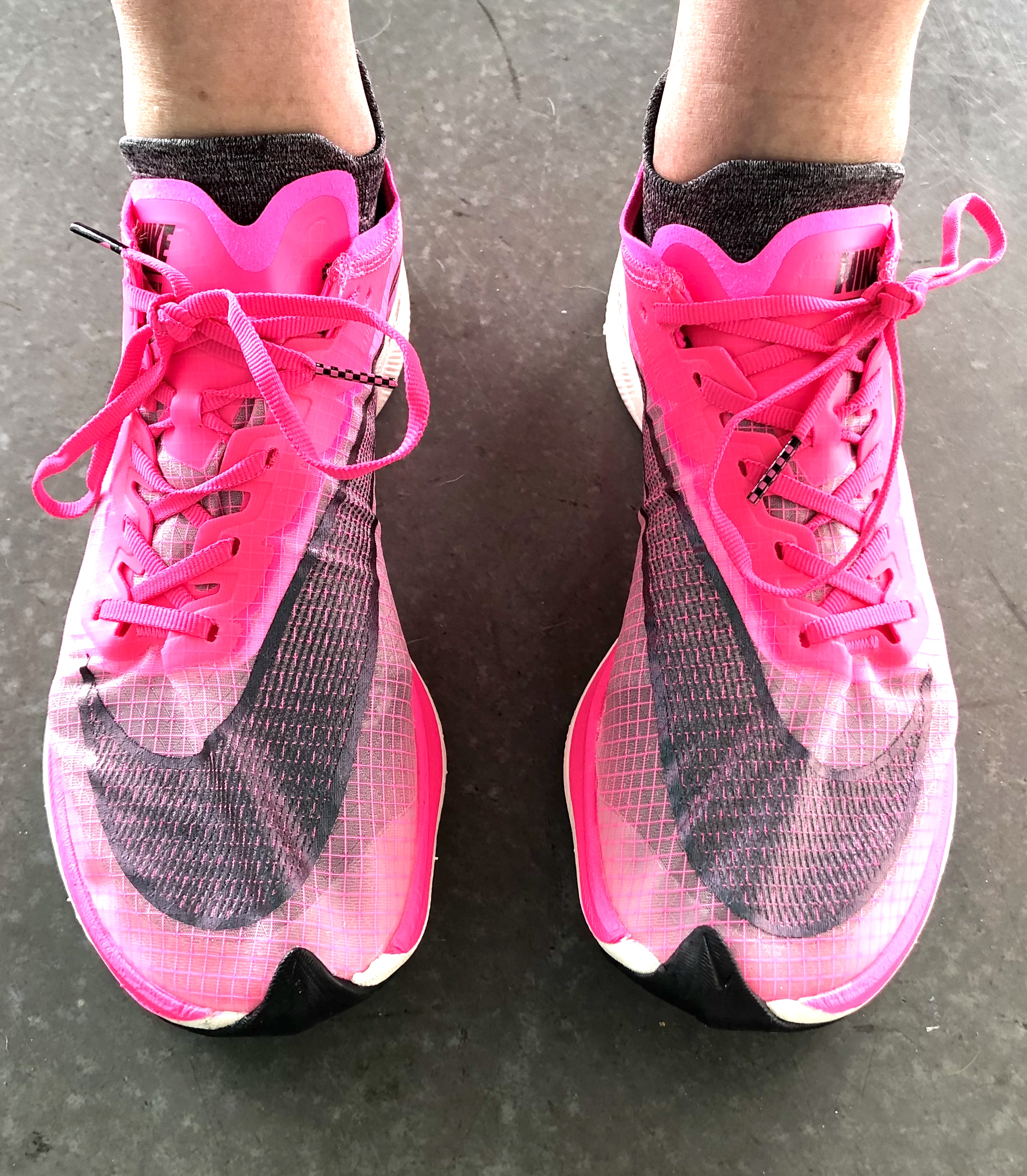 I started running a bit before turning 50 to lose weight (check), get fit (check), and keep my 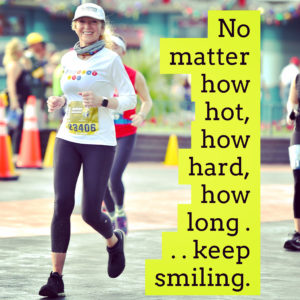 Running is now my go-to exercise but also my favorite way to meditate, solve problems, get creative and let off steam. It’s my super-power. If you’re a runner, you already know what I’m talking about. If you’re not, I encourage you to consider becoming a runner (try the Jeff Galloway Run/Walk/Run program to get started. Hundreds of thousands of runners of all ages and abilities (including me!) swear by his program.). 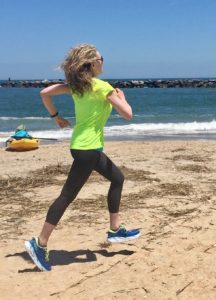 When I first started running, I was fairly slow, not having done much to keep in shape leading up to 50. There was a lot of huffing and puffing going on. But, sticking with it and pushing myself helped me to cross the finish line at my first NYC Marathon a year later. I loved the experience so much, I’ve run six NYC Marathons and two in other cities. I’m pretty proud of my racing record, but the thing I’m most proud of is this: with each NYC Marathon, I’ve gotten faster. Every race has been a personal best.

I started out pretty slowly, finishing my first marathon close to 6 hours (I truly had no idea what I was doing and hadn’t trained nearly enough). But a few months ago, weeks before turning 63, I ran my fastest marathon ever — 5:10. I was aiming for a sub-5 hour marathon but — as my daughter pointed out correctly — I can’t seem to get out of 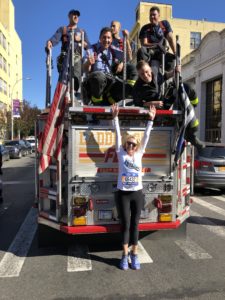 the habit of stopping for photos with New York’s Finest and Bravest who are always along the course. That gives me hope that I am, indeed, a sub-5 hour marathoner if I could just stay focused and stop posing with the firemen. Stay tuned.

But, why was I getting faster even though I was getting older? The more serious approach to training and eating? The copies of Runner’s World I scour through regularly for tips? The Pedialyte I sip for days leading up to the big event? The Maurten gels? All of the above?

Or, is it the shoes?

I can’t even remember the brand of shoe I wore when I first started running. But eventually, when things got more serious and I became more focused, at the advice of a podiatrist I 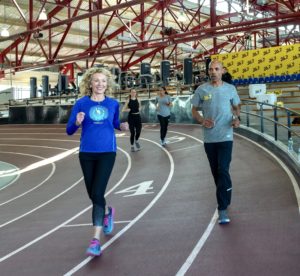 switched to HOKA One One running shoes. They are specifically geared to protecting joints from all the pounding and I highly recommend them for people who are just starting out, especially those who are older. (Here’s a photo of me wearing my HOKA’s with the world-famous Meb Keflezighi,)

Even though I’m a huge HOKA fan (love the Clifton model), about a year ago I started to feel as though my body could move faster, but my shoes were holding me back. Mind over matter or a poor attempt to make my shoes the scapegoat? 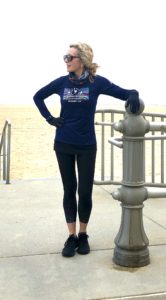 On the recommendation of a shoe expert, I bought the Adidas Adizero Boston 7. I trained with these shoes from May 2019 all the way up to the NYC Marathon in November, and was able to shave 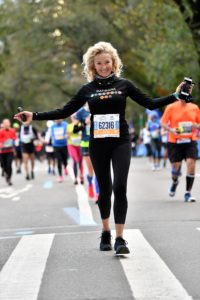 20 minutes off my finish time from 2018 while PR-ing every other race I was in. I just knew I had found “the shoe”. (Here’s a few photos wearing the really great Adidas Adizero).

Then, Eliud Kipchoge broke the world record and completed a marathon in under two hours. something no one had been able to do, ever. What was on his feet? The ZoomX Vaporfly Next% prototype. Then following on the heels of Eliud’s huge accomplishment, Brigid Kosgei smashed the women’s marathon 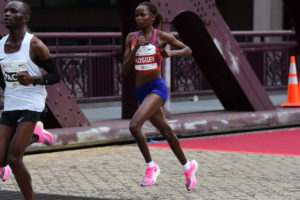 record by 1.5 minutes wearing the same shoe. In November 2019, Kenya’s Geoffrey Kamworor won the NYC Marathon. What was he wearing? Yep, the Vaporfly.

This was such big news that these victories went way 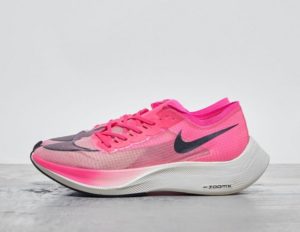 beyond the running community and poured into the rest of the world. Nike it seems had developed a new material — a foam called Pebax — which creates an 87% increase in energy return. And the shape of the shoe causes a runner to rock from their heels to their toes as they land, allowing them to push off again with even greater force and speed, without expending nearly as much energy.

In other words, if two runners with the same abilities were running a race, the one wearing the Vaporfly would win.

This is such an advantage that World Athletics — the governing body of most international track events — is considering banning the Vaporfly from competitive races, comparing it to doping to give runners an edge. Yes, it’s that good.

In fact, an analysis published by The New York Times showed runners wearing ZoomX Vaporfly Next% ran 4 to 5% faster than those who were wearing average shoes.

In a million years I never thought a pair of these outrageously weird and oh-so-very-pink shoes would grace my feet. After all, these were for the fleet of foot, like Eliud Kipchoge. But 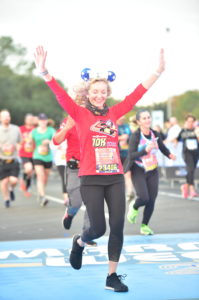 my husband had other plans. For my birthday in December — my 63rd — he gave me a pair. Amazingly enough, he nailed the size. They fit like a glove. But, I was in training for the DisneyWorld 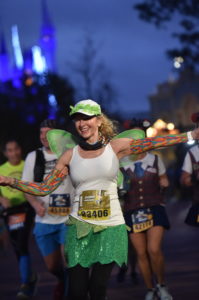 Dopey Challenge (a 4-day racing event culminating in a marathon) and didn’t want to switch shoes until it was over. Once again, I wore the incredibly great and highly recommended Adidas Adizero Boston 7 shoes and did quite well with each race (although no PRs because it was all about running with daughter and stopping to take photos with the Disney characters : )).

Finally, the big day arrived. A few days ago I wore them for a short 4 mile run in Central Park. Here are my “worn them only once” meandering thoughts: 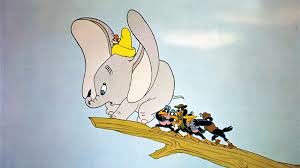 I wonder if the shoes were causing the “Dumbo Effect.” You remember Dumbo, right? He thought the feather he held on to made him fly, kind of like the placebo effect.

So, I will need to take these out for a longer run and then an actual race. My plan is to train for the NYRR Manhattan 7-Miler Race on February 9th using the Vaporflys and then we’ll be able to see what they — and I — are really made of.

Or if it’s a great big Dumbo effect after all.

Then again, does it matter?

Check out this extremely interesting video from the Wall Street Journal about the Vaporfly:

Small Steps to Better Health in 2020

Hi, Barbara- Thus is a very interesting post, even though I don’t run. The headline sounds like an ad but instead you give an in-depth accounting of your progress and the role of shoes in the sport. It’s inspiring! Thanks for sharing your knowledge, enthusiasm and tips. – Angie, http://www.yourtrueselfblog.com

Hi, Loved reading your personal evaluation of your various running shoes, since it’s now the end of June 2020, do you still feel the same about the Nike shoes? I am starting to run, never been a runner and am 57 so I’m thinking about the Hoka that you suggest, but wonder if I should select the Nike instead??? Your thoughts would be very much appreciated.