BERLIN STYLE: Why You Want It & How to Get It

When my husband, Howard, turned 60 this fall, I gave him a trip to Berlin. Rivaling London and Paris, the German capital has emerged as a mecca for food, historical sightseeing (of course) and fashion.

Did I have an ulterior motive? Absolutely! Though Howard’s primary interest is architecture, I hoped he would help me capture the clothing and accessory styles of fashionable older Berliners: Might we Americans be able to learn something from the way German women dress?

Fortunately, Howard’s newest passion is street photography, so he was happy to oblige me by snapping some sidewalk shots. In über-cool East Berlin, for example, the age-45-plus women I observed going about their daily routines had a few things in common: They favored colorful scarves wrapped loosely a few times aroun

d the neck and low-heeled but highly stylish shoes.

The woman at left, for example, was sporting high boots, a brown fringed suede bag (fashionable on both sides of the Atlantic at the moment) and a tasteful scarf. This one caught my eye because of the way the green pulls her outfit together, while the red and orange touches give the ensemble just the right splash of color — and possibly even intrigue.

Both my mystery woman at left and the sensible-but-stylish type we spotted parking her bike below (a common sight in Berlin) were rocking trendy shorter haircuts.

So, is there such a thing as the “Berlin look”? After five days of strolling the city’s streets, day and night, I’m ready to take a stab at defining one: The Berlin look is understated and low-key — simple, pared down, tailored, unfussy, yet resolutely elegant. Even at hip restaurants in the evening, it was unusual to spot a woman wearing an outfit that was overtly sexy, low-cut, too tight or extra-blingy. (On the rare occasion when we did, she was likely to be an American tourist.)

Berliners love tying basic pieces together with an extra touch of style. It might be a tasteful but functional crossover bag, pants hemmed at that perfect point just below the ankle, or a tailored jacket. Overall, colors leaned toward neutral tones, with a concentration in varying shades of brown, tan, navy and gray. (Black still seems to be a New York thing for now.) The ever-present scarf, like the turquoise-lilac number at right, is usually the one piece that adds the essential grace note of color.

No matter what their age, women walked or biked everywhere — probably the main reason why Berlin style is best described as “practical” (and Berliners themselves as “trim”). And they packed an invisible accessory that no couturier could ever give you: self-confidence. Add that to your wardrobe and you’ll achieve a sense of style that transcends whatever you happen to be wearing.

Looking for more tips on fashion, makeup, hair, dating, style, health and fitnes? You’ll find them in The Best of Everything series. 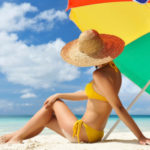 FASHION FLASH! The BEST OF EVERYTHING in Style, Health, Beauty, Travel and So Much More!