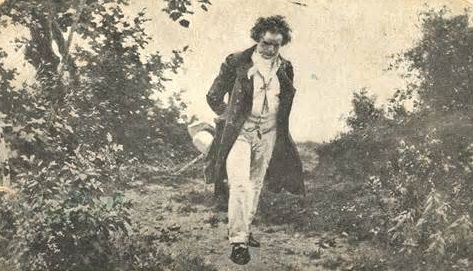 A recent report from the American Psychological Association made me think that Ludwig von Beethoven was a man ahead of his time, in more ways that just musically.

According to Beethoven experts, his best ideas came to him when he walked. I’ve written often about how running puts me into a zen-like state, mentally unencumbered by conversation, technology, reading or much of anything. Apparently, Beethoven felt this way about walking, and became famous in Vienna for regularly taking long strolls around the city and exploring the neighboring woods. In fact, one of my favorite pieces of music — Symphony No. 6 in F major, Op. 68 “Pastoral” — was inspired by his frequent walks in the country. It seems he instinctively understood the connection between exercise and creativity.

But, according to the study, one doesn’t need to be in beautiful, pastoral surroundings to be inspired. The New York Times, which reported on the findings earlier this week, explained:

To examine another real-world implication of walking and creativity, Dr. Oppezzo moved portions of the experiment outdoors. “Most people would probably guess that walking outside should be much better for creativity” than pacing inside a drab office. But surprisingly, her study undermined that assumption. When volunteers strolled Stanford’s pleasant, leafy campus for about eight minutes, they generated more creative ideas than when they sat either inside or outside for the same length of time. But they were not noticeably more creative as a result of their plein-air walk than when they subsequently walked on an indoor treadmill, facing a blank wall.

“It really seems that it’s the walking that matters,” in terms of spurring creativity, Dr. Oppezzo said, and not the setting.

While walking benefits our overall health and wellbeing, now we can add another reason we should get up and move around–no matter where we are–whenever we’re feeling stuck. It’s one of the best weapons against writer’s block I’ve ever used. And burns calories, too! What’s not to like?

For a super short tip on why you want to walk even more, take a look at this:

Until next time, remember this: we can’t control getting older but we can control how we do it!

FASHION FLASH — The Best of Everything in Beauty, Style, Fitness and Health