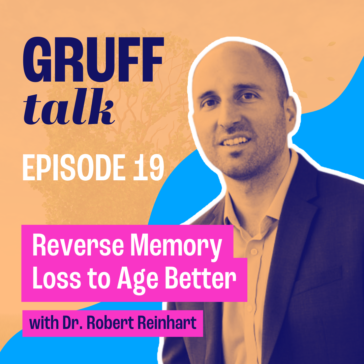 The thought of losing your memory (or your mind) is one of the scariest things I can think of. It is my biggest fear. After losing my grandmother to Alzheimer’s and seeing the impact of her declining cognitive abilities, I because inspired to learn and do everything possible to maintain my memory and stay sharp.

According to the Alzheimer’s Association, an estimated 6.5 million Americans aged 65 and older are living with Alzheimer’s in 2022.

That figure is predicted to nearly double by 2050. (source)

I read about today’s guest in a recent article focusing on a research study that was released explaining how a new wearable technology was successful in reversing short and long term memory loss.

Dr. Robert Reinhart is a neuroscientist and assistant professor at Boston University and is the Director of the Cognitive & Clinical Neuroscience Laboratory. He earned his PhD from Vanderbilt University and is focused on understanding the fundamental brain mechanisms of human cognition. Dr. Reinhart is hard at work looking for ways to develop innovative therapeutics for people suffering with brain disorders.

This episode of GRUFFtalk is literally a mini neuroscience master class. During our discussion, Dr. Reinhart explains the neurobiological sources of memory loss relating to white matter, gray matter, brain cell volume deficits, and age-related changes in the receptors.

The functional brain connectivity is the focus of his latest research which takes a bird’s eye view of the brain’s activity that connects various areas of the brain. Some of the brain networks being decoupled due to aging is what Dr. Reinhart’s research was charged to improve.

Listen to the conversation here.

Dr. Reinhart’s lab took on their research with the goal of better understanding the synchronous waves of the brain. When two areas of the brain are not communicating effectively because they are out of sync, memory can sharply decline.

The experiment for this procedure involved people between the ages of 65 and 88 with normal cognitive levels for their age. The wearable technology looked more like a swimmer’s cap with electrodes attached. Participants of the study were treated for 20 minutes a day for four consecutive days. The wearable technology was used by Dr. Reinhart’s team to see where the “windows” of desynchronized brain activity were, and it would then deliver an extremely weak electro current application to dial up or dial down those currents to get those areas back in sync.

This therapy is not to be confused with electroshock therapy or transcranial stimulation. This is brain modulation and is the equivalent of training those pathways and synchronization to keep that “window” of communication open between different areas of the brain.

“You can learn so much in such a small, compressed amount of time when you’re truly inspired, so dial up your curiosity and get inspired.” -Dr. Robert Reinhart

If you’d like to submit your questions for a future episode, send an email to grufftalkpodcast@gmail.com 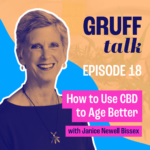 How to Age Better with CBD 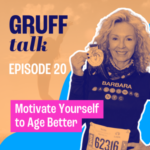 How to Get Motivated to Move More

Walk Your Way Through Menopause and Beyond. How? L

NEW EPISODE! Listen to this one while you take a w

Exercise is an essential part of healthy living, a

Does CBD Work for Menopause Symptoms? CBD can be a